In a previous post I highlighted Census data released last fall which shows that Miami Beach is the 10th city in the nation for biking to work. Approximately 7% of workers regularly use a bicycle for the longest part of their commute. That’s about 3,000 people in our city biking regularly to work, and I was curious – who are they? 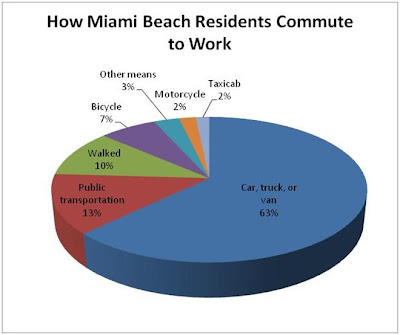 With Miami’s bike scene growing like crazy lately-- thousands showing up for Critical Mass, new bike facilities in the works for Downtown, etc.-- it would be easy to assume that these bicyclists-to-work are bicycle activists, young urban professionals, or the like. But the data indicate something else.

On Miami Beach those most likely to bike to work are service industry workers with median annual earnings of about $21,000 per year, well below the citywide average of $32,597. Here are the top 10 industries:


[Data note: Due to small sample size, the ACS 1-year data used for the national ranking is not available by industry, so I used the 2011 5-year averages. Even so, the relatively small number of bicyclists among all commuters means that breakdowns for bicycling alone are not available: they are combined in a category with taxicab, motorcycle, and a miscellaneous “other” category of commuters.]

While I was at it, I decided to look at those who walk to work too, and found much the same thing. Fifty-three percent of those who walk to their jobs work in accommodation, food service, arts or entertainment, and median annual earnings are $14,622. Three-quarters of commuters have at least one vehicle available, but less than half of those who walk or bike do.


This isn’t a surprise really, since there are a lot of low paying jobs in the tourism and hospitality industries which dominate Miami Beach’s economy. But it does make Miami Beach unique, especially among walking cities. For walking to work Miami Beach ranks 10th in the nation among cities with at least 65,000 residents, which is especially remarkable because Miami Beach is the highest ranking non-university city on the list. If you take out the places with colleges, we’d be number 1.


In order to have people walking to work, you need a few things. People have to live close enough to walk, and the streets have to be pedestrian friendly. Miami Beach accomplishes this through preserving the residential, urban character of historic sections of South Beach and North Beach which were built in the early 20th century with walking in mind. Maintaining a supply of housing affordable for those who work in the nearby service industry jobs is more challenging in desirable areas, but the Miami Beach Community Development Corporation has been able to restore and preserve nearly two dozen buildings since 1981 for affordable housing programs. The organization’s chair, Jack Johnson, said at a recent planning meeting for the upcoming Sustainable and Authentic Florida meeting to be hosted by Miami Beach, that the MBCDC “has worked to maintain a mix of income levels by using historic buildings in their ‘native habitat’.” In doing so it has accomplished a key tenet of New Urbanism that otherwise frequently gets overlooked when it comes to those in low wage jobs. In a very real way the availability of affordable housing in Miami Beach takes cars off the streets, reduces the city’s pollution and greenhouse gas emissions, and contributes to a better quality of life for everyone.

One other interesting fact: those who walk or bike to work are much more likely to leave home in the evening, anywhere between 4pm and midnight. 21% of walkers and 17% of bicycle/motorcycle/taxicabbers leave for work during that time, compared with only 9% of all commuters. All the more reason for safe, separated, lighted pathways for bicyclists and pedestrians to be part of every infrastructure and transportation plan.
Posted by Emily Eisenhauer at 4:11 PM