Does this change everything? Photos from the People's Climate March


The slogan for last Sunday's People's Climate March was “To change everything we need everyone.” Official estimates were that 400,000 people participated in the march, far and away the largest environmental protest ever, and the largest demonstration of any kind in a decade. So does this change everything? Probably not – at least not this week at the UN. But it does change at least two things:

1. Climate change is mainstream. The tide began turning on the denialists in 2012 when the impacts of Hurricane Sandy were widely linked to climate change and when a high profile climate change skeptic released his own scientific findings confirming that climate change was happening due to human activity. There will always be skeptics, but the debate is officially over, and people want action. As Mother Jones put it, "the next time someone says no one gives a shit about climate change, show them this photo."

2. Climate change isn't just about the environment anymore. The march was led by indigenous communities, people from neighborhoods impacted by Superstorm Sandy, and environmental justice organizations. These are the "Front lines of the crisis, forefront of change" that made up the first contingent, followed by labor unions, students, alternative transportation advocates, peace groups, anti-fracking campaigns, scientists, LGBT groups and many, many more. Organizers worked hard to make justice a key theme of the march, highlighting not only the impacts but the solutions offered by people with deep experience of being impacted by multiple crises. The range of issues represented shows what a big-tent issue climate is becoming, and that working "across silos" sends a powerful message about the urgency of the situation and the link between climate change and the struggles that people are already facing. In short, it was an inspiring and very hopeful day. 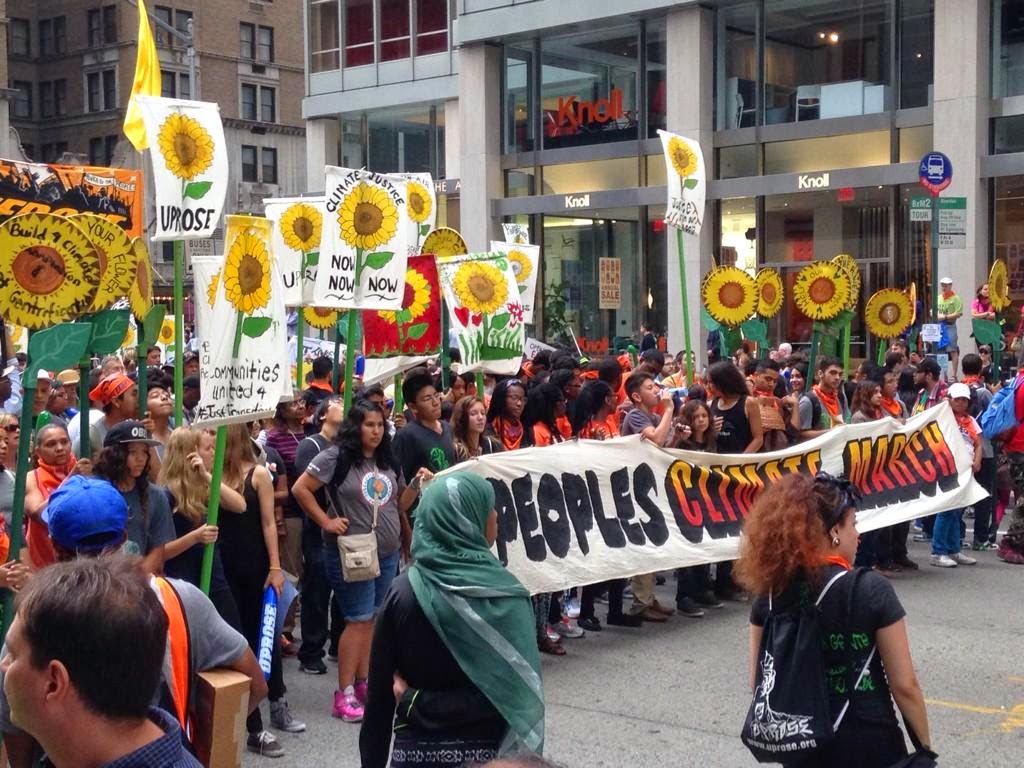 Youth organized by the Climate Justice Alliance led the march. Even before thousands of people showed up, the march was already a major victory for cooperation between historically divided conservation focused environmental organizations and the environmental justice movement. 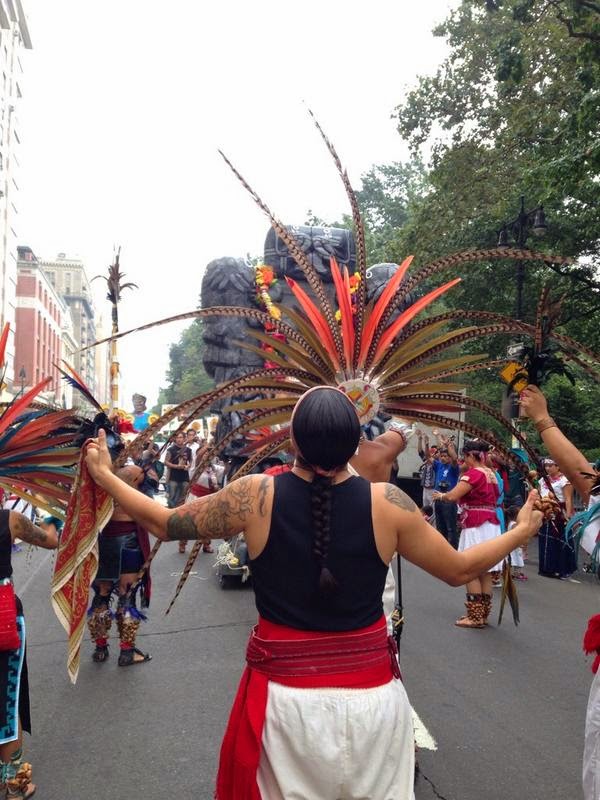 Indigenous communities have played a leading role in pushing for change, highlighting the destruction and displacement they've faced for hundreds of years under colonialism, and how that continues today from extractive industries and land loss due to sea level rise. 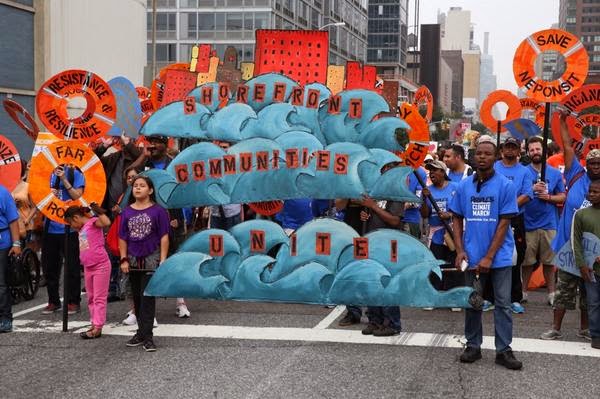 Lots of people came to the march who had been impacted by Superstorm Sandy, holding life preservers with the names of their communities and signs saying “preserve our communities” and “organize to survive.” 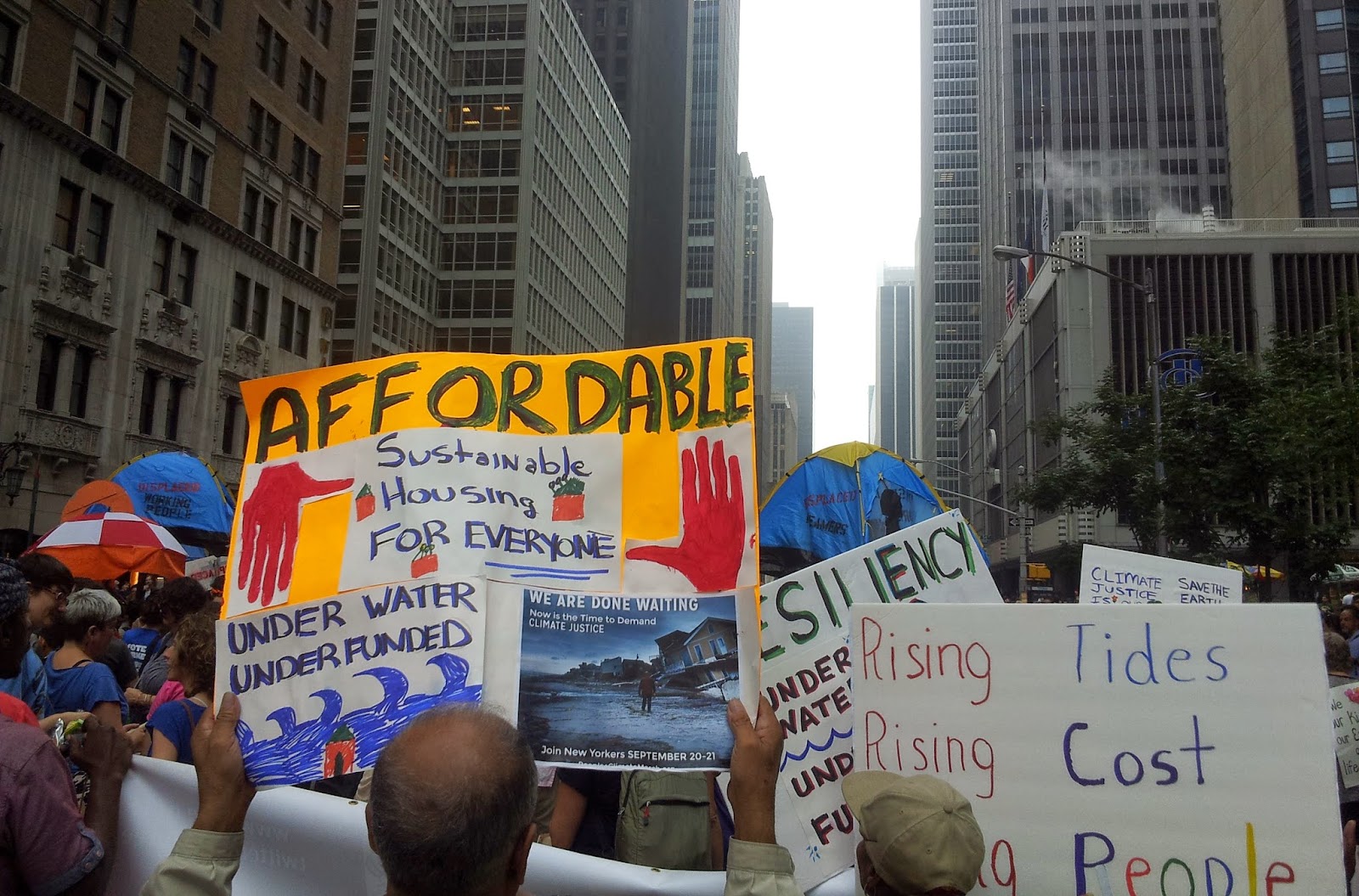 Public housing residents and housing rights groups like Right to the City chanted about multiple crises affecting low income communities, such as “Rising tides, rising rents, rising people take the power back” to highlight the connection between sea level rise and housing vulnerability. 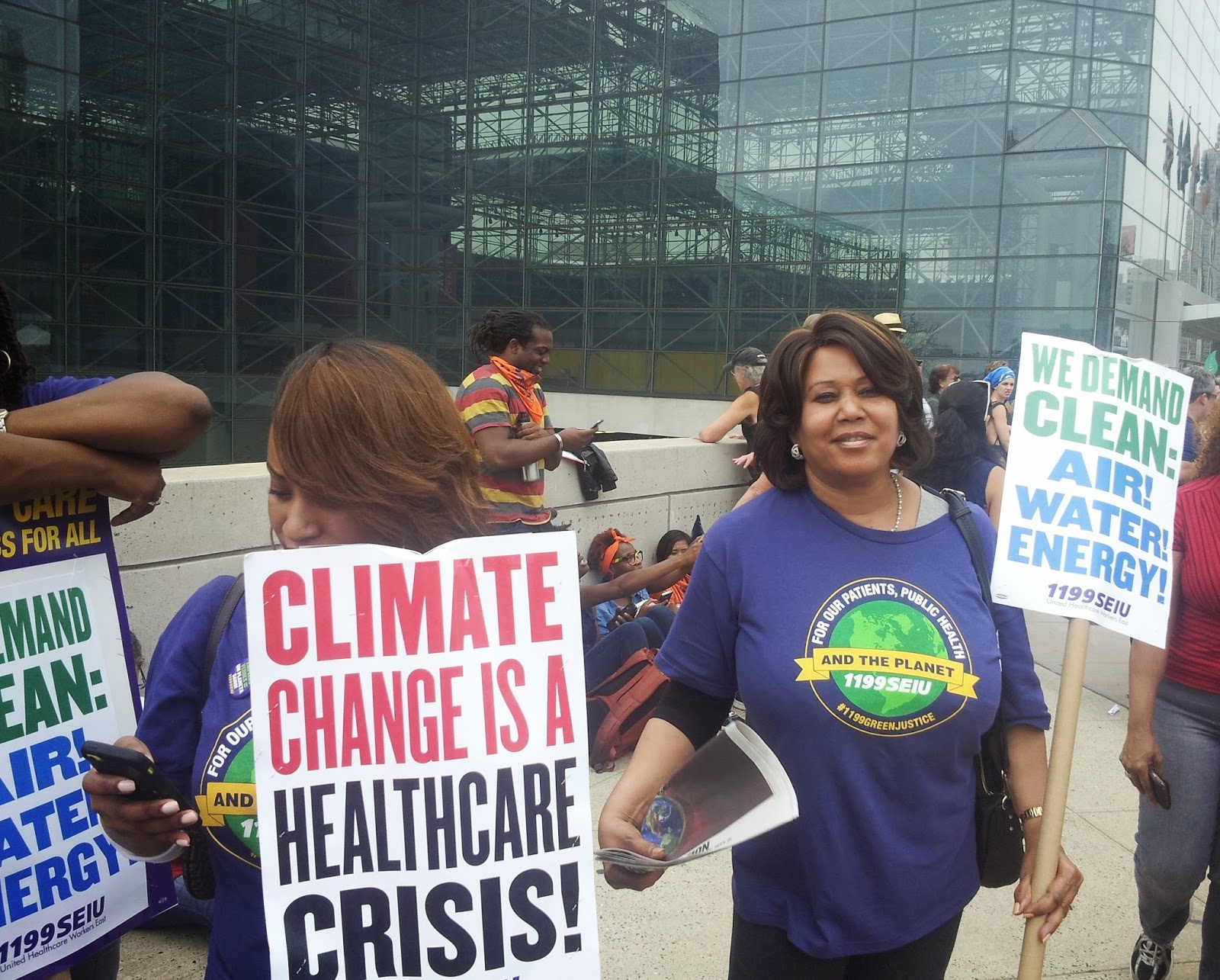 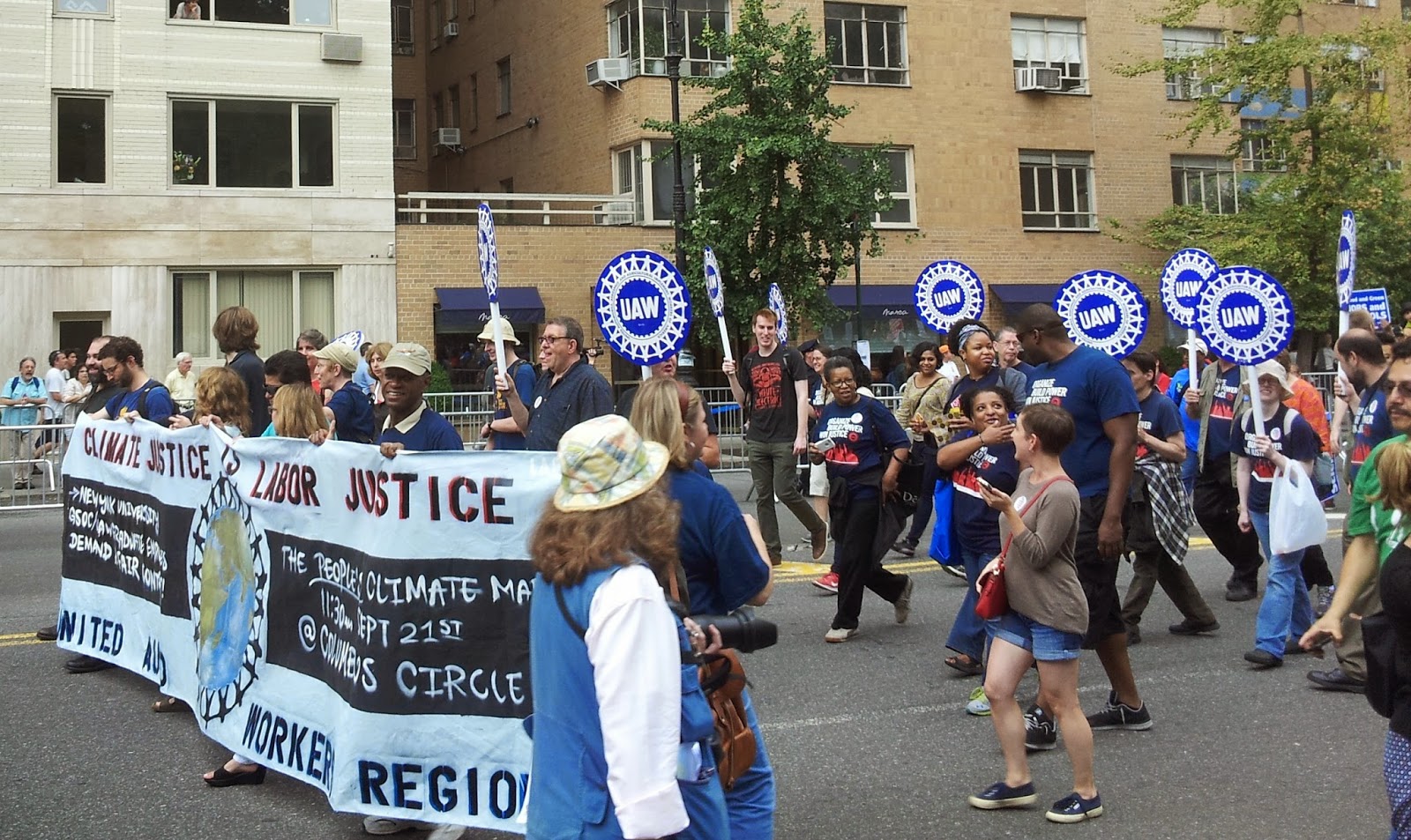 Who says protecting the environment hurts the economy? United Auto Workers came out to demand green, high quality jobs. Dozens of unions participated in the march, including many who worked to repair infrastructure after Sandy. 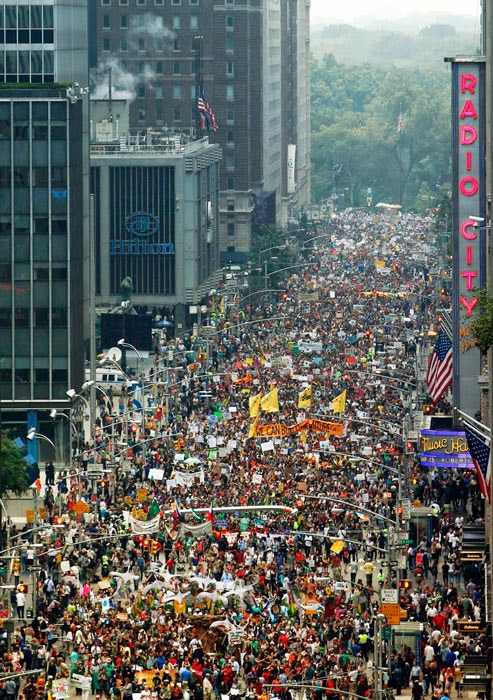 Here comes everybody! People stretched as far as you could see, and it took 6 hours for everyone to reach the end.

The march was uplifting, but climate change is serious.The next day thousands flooded Wall Street to challenge the corporations that continue to pollute for the sake of profit. Many were arrested, including the Center for Biological Diversity’s mascot Frostpaw. Keeping pressure on world leaders for real action will take continued organizing and cooperation among diverse sectors of society. 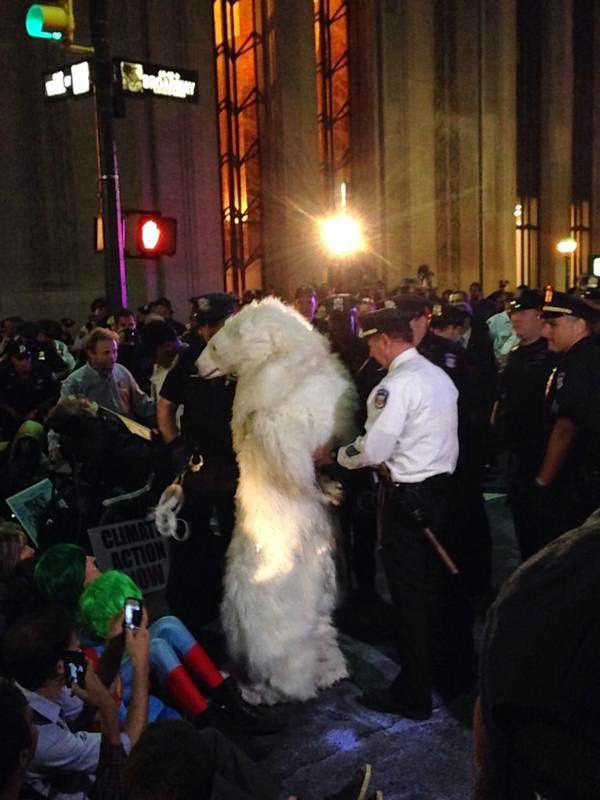 Posted by Emily Eisenhauer at 6:45 PM