In the last week at least 6 of my friends have posted this article on Facebook. 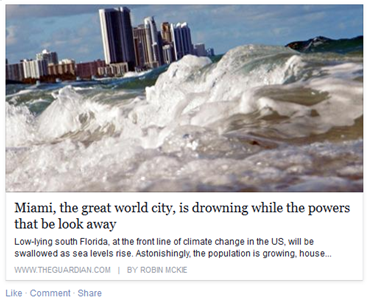 Being scary was clearly the intention of the article. Miami’s future with rising seas is described with words like “calamitous” and “mayhem.”

Fear can be a good motivator, but the question is what kind of action is motivated by this fear? Does this fear motivate action that will mitigate climate change? Or does it do something else?

There’s a theory among climate change communicators that has helped spur these scare articles called the “finite pool of worry.”  Researchers have observed that when people's concern about one issue rises, for example about the economy during a recession, concern about other issues such as climate change drops down the list.[1] The reason, according to a 2006 paper titled Experience-Based And Description-Based Perceptions Of Long-Term Risk: Why Global Warming Does Not Scare Us (Yet)[2]  is that climate change seems distant, and removed from our direct experience. The way to fix this is to establish an emotional connection with the issue because “emotions like fear or worry motivate us to remove ourselves from a dangerous situation or to change the environment in ways that reduce our feeling of being at risk.”

But researchers have also noted several important caveats about the emotional response to threat, one being that it tends to lead to “single action bias.”[3] This means that people who perceive a threat tend to take one action in order to lessen the feeling of threat, even though that single action may not be adequate to actually solve the problem. It’s like changing your light bulbs, but continuing to drive the gas guzzler.

The second caveat is that increasing worry by too much can cause emotional numbness, can cause people to shut down. Too much “doom and gloom” can be overwhelming and leave people feeling hopeless and disempowered. (More about this and how to communicate around it here.)

But the Miami-is-drowning articles reveal a third caveat, or at least a variation of the first - that actions motivated by a desire to “remove ourselves from a dangerous situation” don’t necessarily address the root of the problem. When we feel threatened by sea level rise what do we do? We build sea walls and install pumps. Or we move. These actions might make us feel more secure, but they do nothing to stop or reduce climate change.

There is only one thing that will mitigate climate change, and that is dramatically reducing our use of fossil fuels now. Unfortunately this barely gets a mention in the article, until the second to last paragraph when geologist Dr. Harold Wanless is quoted as saying, "Every day we continue to pump uncontrolled amounts of greenhouse gas into the atmosphere, we strengthen the monster that is going to consume us. We are heating up the atmosphere and then we are heating up the oceans so that they expand and rise.” It ends on a sad note, “There doesn't look as if anything is going to stop that.”

Scientists have a duty to report their best estimations, and can be forgiven for being pessimistic when their warnings have been ignored for decades. However there are promising signs of change happening, and it is our moral obligation to do everything we can, not just for us and not just for Miami, but for all the places and people that will be impacted far harder in many cases.

What are the motivators for real action to mitigate climate change? Stay tuned for Part 2.
[1] Scruggs, L. and Benegal, S. 2012. Declining public conern about climate change: Can we blame the great recession? Global Environmental Change, 22,  2, 505-515.
[2] Weber, E.U. (2006). Experience-based and description-based perceptions of long-term risk: Why global warming does not scare us (yet). Climatic Change, 77, 103-120.
[3] Center for Research on Environmental Decisions. (2009). The Psychology of Climate Change Communication: A Guide for Scientists, Journalists, Educators, Political Aides, and the Interested Public. New York. Available on-line at http://guide.cred.columbia.edu/guide/sec4.html
Posted by Unknown at 7:47 PM